It’s simple. Get naked, get in the tank, stop moving.  The water, super-saturated with 1000 lbs. of Epsom Salts, and slightly above body temperature, does the rest. One of the best things about the float tank is that it requires no particular experience, ideology, or belief system. In fact, aside from allowing yourself complete repose, it is best to just let go of any preconceived ideas of what will happen. Experiences run the gamut from intense, drug-free lucid dreams to profound mental and physical rest. Every float is unique. However, what is certain is that while bobbing weightlessness in deep dark and quiet, a visceral “re-set” button gets pushed, amplifying and embedding any intention or practice you might already have.

While many of us dither away precious energy arguing over opinions and convictions, the floater enjoys a welcome respite from thinking altogether. Floating works best if you simply don’t try to do anything at all.

John Lilly, the inventor of “sensory deprivation tanks”, always spent the first fifteen minutes or so of his float sessions consciously relaxing every muscle in his body. After that, he simply remained as present as possible. (Please also see Part 2 ~ History) 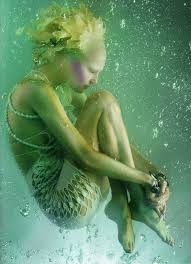 Floating has become a creative catalyst for the process of many artists and innovators. Extraordinary minds as diverse as Richard Feynman, Buckminster Fuller, Aldous Huxley, Alan Watts, and Graham Hancock have found floating useful. Actors such as Jim Carrey, Jeff Bridges, and Susan Sarandon, are devotees of sensory deprivation tanks. Comedian Joe Rogan has one at home and touts his tank as a cognitive enhancer, think tank, and psychotherapist all rolled into one. However, most new adherents are regular people looking for a reprieve from their hectic lives and a chance for some deep, uninterrupted, introspection.

Bobbing in the timeless sphere of a float tank causes all the neurological conduits in your body to redirect away from sensory perception, instead focusing that energy towards mending and rejuvenating cells and tissue. The deep mental quiet that results from removing visual, auditory and tactile stimuli allows a deeper level of brain function to come to the fore of consciousness. Studies have shown that floating can ease depression by working, according to author Michael Hutchinson, “against over-activation of the parasympathetic response by causing the body to release certain natural antidepressant and euphoria-causing neurochemicals, such as the endorphins. At the same time, floating powerfully reduces overactivation of the sympathetic, fight-or-flight response.” 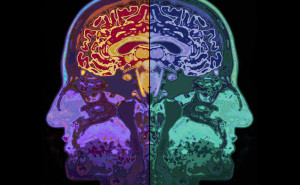 Flow Between Both Sides of Brain

The creative, intuitive, right hemisphere of the brain becomes dominant during a float-session and the rational, left side of the brain, gets a complete rest. The ensuing regular waking hours are more balanced as the flow of information between the two hemispheres remains enhanced. High conductivity between both sides of the brain, is a trait shared by many geniuses as well as spiritual adepts. Out-of-body experiences, astral travel, and hallucinations are also not uncommon (see Part 1). Some people already practicing yoga have reached the most expanded level of meditation they’ve ever known short of retreating to a secluded ashram.

I have found that post-floatum, decisions that have been hard to make (usually because I was trying too hard to “figure it out”) often smoothly give way to clear choices. Plots for stories, financial ventures, how to balance family responsibility versus my artistic life, all became less like onerous chores and more like fun. 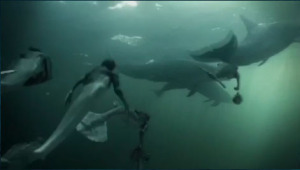 Are We Really Mer People?

Conceived in salty water, we spend our first 9 months floating in amniotic fluid. Our bodies then remain nearly 3/4ths saline solution throughout our lives. Indeed, possibly all life on Earth evolved from the dark and briny deep, so it seems intuitively correct that it might be good for us to steep ourselves in salt water and stillness whenever possible.

When you step into a sensory deprivation tank clothed in only your birthday suit, you become vulnerable to yourself alone… but also completely safe. The ego is immediately removed from this practice. Your job, car, clothes, diet, beliefs, computer and phone, have little significance in the tank. During a float session, the external noise that we so often mistake for truth recedes from our waking consciousness like fleeing shadows. Pesky obstacles to higher consciousness like bad hair days and gravity are temporarily gone, leaving you alone with your deepest self. 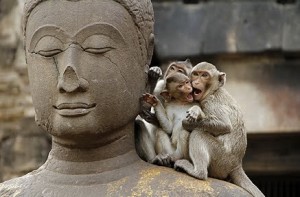 Much of the chatter generated in our brains gets triggered by stuff we see. This is commonly called “monkey mind”. The constant mental, sub-rosa, potpourri  of images, memories, worries, and 1001 mental associations, judgements and attachments… plus a lifetime of conditioning.

A person walks into the room with sandy hair and blue eyes, and some part of your brain categorizes them with all the people you’ve ever come across with those same characteristics. Holidays also bring up deeply rooted memories of all holidays past, and what occurred during them. This in turn informs your expectations and desires for what should or should not be happening in the present and future. It’s an endless cycle of pattern recognition. Every second, whatever you are doing, your brain is attempting to catalog current and predict forthcoming experiences; helpful for survival at some level, but it can also cause us to get stuck in past interpretations, keeping us from fully living in the present moment. The float tank experience allows you to quickly shed many layers of physical and mental conditioning, to find… YOU. 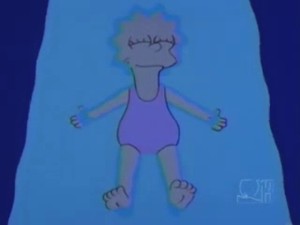 Floating works best when you stay as motionless as possible while in the tank, allowing the body and brain to come to a complete stop. The ideal is to keep yourself somewhere between sleep and waking. Entering a prolonged hypnagogic state of consciousness is very effective all on its own, and can profoundly alter one’s mood, life perspective, and physical health for the better. But float tanks are also highly conducive to accelerated learning techniques such as subliminal recordings, verbal cues, or in some cases audio/visual images. Many people have ended bad habits or negative neurotic patterns after only a few float sessions.

HOW DO THEY WORK?

How exactly, does floating in water super-saturated with Epsom Salts, facilitate beneficial changes for so many people? How does something somewhere between a bath, a meditation, and hiding in a wet storage locker, become one of the greatest modern tools for personal transformation? The answer lies to a large extent with the creator of the sensory deprivation experience, John Lilly. (Please see Part 2 ~ History), a peerless and fearless explorer of the outer realms of human experience. 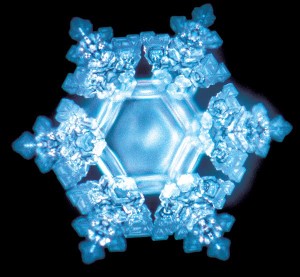 Water amplifies frequency. This is well-known by anyone studying aquatic animals such as whales or dolphins and their sonar communication. What is less understood is how water conducts more subtle frequencies, the ones too fine spun to hear with our physical ears. It appears that soaking in a sensory deprivation tank conducts neurological and psychological frequencies more efficiently than in air, and “cleanses” them at the same time. This also gives credence to theories of our aquatic origins.

Apart from Lilly-esque adventurers in expanded consciousness, floating has also proven to demonstrably speed recovery from surgery and stress injuries. Floating weightless removes all strain on the body imposed by the continual pull of gravity. Many people living in big cities have corrosive adrenalin constantly coursing through their bodies, the by-product of non-stop stress. Floating immediately alleviates pain and reduces stress damage to our bodies. 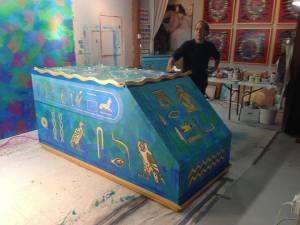 Current models of float tanks now run the spectrum from rectangular boxes the size of portable storage lockers, like Samadhi Tanks (the first tanks made for home use and with Lilly’s personal advice), which sell for around $8000); to walk-in room-type units or even Venus de Milo style, shell-shaped fiberglass pods (which are selling on eBay for $40,000). A very affordable tank, called the Zen Tank, has just come on the market, going for less than $2000. 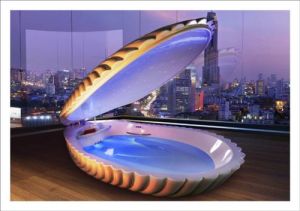 Whatever style you find yourself in, all are usually filled with around 1000 lbs of Epsom salt-saturated water kept at slightly above body temperature, allowing you to bob on the surface as effortlessly as a ‘Lilly’ on a pond. Free from the  effects of gravity, and with the demarcation between skin and water barely discernible. Almost everyone reports sensations such as moving through vast space, or even flying. Some people feel as if they are slowly spinning, or positioned upright instead of prone, even though the pods are too small to actually turn around in, and the water is usually no more than twelve inches deep. It seems utterly paradoxical that by entering a small, enclosed space you can experience being delightfully unbound, something akin to gliding in a weightless, extended savasana, (rest pose after yoga practice). Even the most claustrophobic have experienced a buoyantly unrestricted feeling inside the pods. In fact, many people (myself included) have lost their claustrophobic fear altogether. You can even drift into sleep. If, by chance, your head turns too far, the salty water in your eyes will wake you immediately. 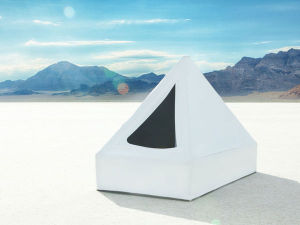 Many adherents to floating have discovered that the one to three-hour float sessions help them dissolve stress, end chronic physical pain and can unravel long-term psychological knots. The great revelation for me has been the heightened creativity that seems to flow from my psyche after every float. Many people have reported quantum leaps and “aha” moments while floating or just after. My experiences have included a couple of waking, lucid dreams, a lot like hallucinogens but with zero angst or loss of bearings. (See Part 1 Experience.) But mostly my experiences have been more subtle; deeply restful, rejuvenating and healing. For up to five days after floating, I have noticed a sharpening and widening of my perception, insight, and cognitive synthesis, even my sense of smell and hearing become greatly enhanced. Hatha yoga, smart drugs, and sitting meditation, all great, do not compare.

REPORTS AND STUDIES HAVE SHOWN THAT FLOAT TANKS BENEFIT:

1. People who “cannot get still”, who have ADHD, or any attention issues. Many find themselves able to focus more clearly and deeply than ever before.

2. Floatees increase their Theta brainwaves, (4-7 hz); (see chart below) slow cycling but high-frequency brainwaves which coincide with the hypnagogic state we experience just before falling asleep and just before fully waking. Theta brainwaves are also closely linked to creativity, super-learning, meditation, as well as visionary experiences and quantum leaps of understanding. 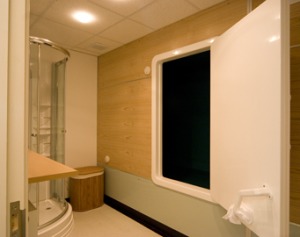 3. Hemispheric and whole brain integration increases the ability to synthesize and understand new ideas. The active Alpha state (see chart below), while necessary and useful, can also block our connection to the vast supra-conscious well of knowledge and wisdom.

4. Increased feelings of self-confidence and self-mastery.

6. Sleep disorders are greatly helped. In fact many people achieve the deepest, most rejuvenating sleep experienced in years after floating.

7. Consciously cultivating slower-cycling brainwaves (in other words learning how to stay in a prolonged Theta state without falling asleep) allows the brain to cleanse subconscious memories and feelings, while upgrading the software at the same time. It also seems to help one’s relationships in general. Psychological disorders and neurotic tendencies can often be erased after several sessions.

8. Epsom salts contain a high level of Magnesium, which is a very common deficiency. Magnesium is best absorbed via the skin. While floating, a large measure of usable magnesium gets absorbed through the skin, while also helping to draw out toxins.

9. For reasons not completely known, floating causes the brain to release a large amount of endorphins. The floaters “high” seems to last anywhere from 48 hours to 2 weeks. 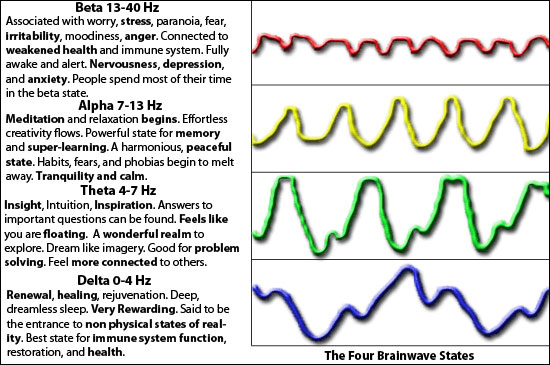